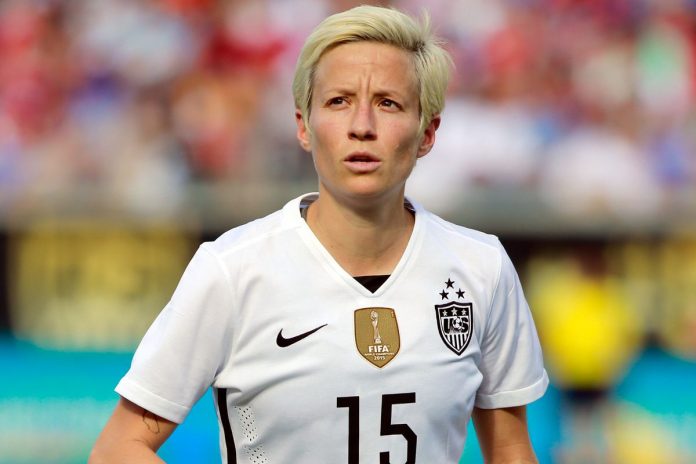 President Donald Trump responded Wednesday morning to a disparaging comment by Megan Rapinoe, co-captain of the U.S. women’s national soccer team, by chastising her for “disrespect[ing] our Country” and invoking the black unemployment rate in a bizarre series of tweets.

Rapinoe recently told a reporter, “I’m not going to the fucking White House,” when asked if she was excited about the prospect of such a visit.REAL LIFE. REAL NEWS. REAL VOICES.Help us tell more of the stories that matter from voices that too often remain unheard.Become a founding member

“We’re not gonna be invited,” added the star player, who once called herself a “walking protest” of the Trump administration. “I doubt it.”

In Trump’s tweets, which were initially deleted because he had tagged the wrong Megan, the president extended the invitation.

“We haven’t yet […] invited Megan or the team, but I am now inviting the TEAM, win or lose. Megan should never disrespect our Country, the White House, or our Flag, especially since so much has been done for her & the team,” he wrote. “Be proud of the Flag that you wear. The USA is doing GREAT!”

U.S. women’s national soccer teammate Ali Krieger replied in solidarity with Rapinoe later on Wednesday, saying that she planned to sit out a White House visit, too. Both women are gay and oppose Trump administration policies on LGBTQ rights, among other issues.

The White House invite, however, came after a strange pivot to another story in the world of sports ― NBA Commissioner Adam Silver’s suggestion that the league may transition to the term “governor” or “chairman” where it currently uses “owner.”

The potential change comes amid concerns that “owner” could be seen as a reference to slavery because the majority of players are black and the majority of people making decisions about the teams are white.

“Other than the NBA, which now refuses to call owners, owners (please explain that I just got Criminal Justice Reform passed, Black unemployment is at the lowest level […] in our Country’s history and the poverty index is also best number EVER), leagues and teams love coming to the White House,” Trump wrote.

Trump frequently cites unemployment rates when confronted with criticisms from communities of color in order to downplay their concerns. In fact, the unemployment rate for black Americans has been declining over the past decade and is still significantly higher than the overall unemployment rate.

The president has a long history of picking fights with American athletes who speak critically of him or demonstrate for civil rights. Trump has infamously bickered with former NFL quarterback Colin Kaepernick for taking a knee during the national anthem to protest police brutality and racial inequality.

Rapinoe has also taken a knee during the national anthem in the past, although she has since been prevented from doing so by the U.S. Soccer Federation.

Throughout the Women’s World Cup, Rapinoe has declined to sing the U.S. national anthem on the field and has stood with her hands at her sides instead of over her heart.

Asked by The Hill whether Rapinoe should protest on an international stage, Trump replied, “No, I don’t think so.”