President Trump made an unapologetic bid to break the Democratic Party lock on the black vote with a State of the Union address that featured black people and highlighted administration policies geared toward the black community.

Trump’s remarks Tuesday evening came on the heels of a campaign advertisement run during the Super Bowl that spotlighted the president’s commutation of the life sentence of nonviolent drug offender Alice Johnson, a black senior. At least in part to boost support among black voters, a key Democratic constituency, as his reelection campaign accelerates, Trump, before a prime-time television audience, lauded the accomplishments of black people and proposed education reforms to improve access to quality public education for black children. 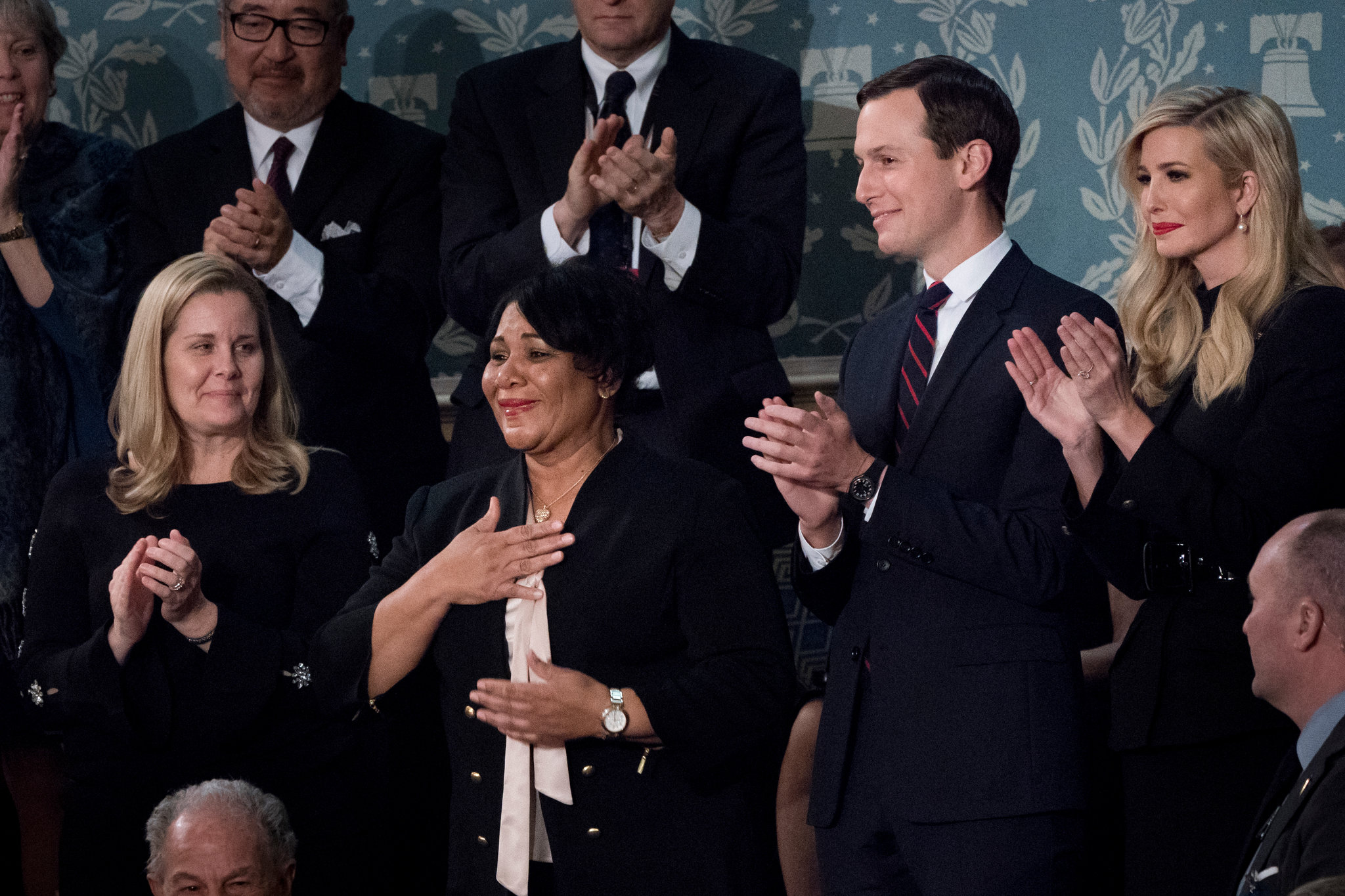 “To expand equal opportunity, I am also proud that we achieved record and permanent funding for our nation’s historically black colleges and universities,” Trump said, after introducing Stephanie Davis, a black woman from Philadelphia, and her daughter Janiyah, who were in the gallery with first lady Melania Trump.

“Janiyah’s mom, Stephanie, is a single parent. She would do anything to give her daughter a better future. But, last year, that future was put further out of reach when Pennsylvania’s governor vetoed legislation to expand school choice for 50,000 children,” Trump said. “But there is more to their story. Janiyah, I am pleased to inform you that your long wait is over. I can proudly announce tonight that an Opportunity Scholarship has become available. It is going to you.”

Trump also paid tribute to one of the last surviving Tuskegee Airmen, a squadron of black fighter pilots who fought in World War II. With Charles McGee in full military dress looking on from the House gallery with his great-grandson, Trump announced that he had promoted the 100-year-old Ohioan to the rank of brigadier general.

“Earlier today, I pinned the stars on his shoulders in the Oval Office. Gen. McGee, our nation salutes you,” Trump said.

Democratic activists have scoffed at some Republicans’ claims that Trump might cut into the Democratic Party’s command of the black vote, an advantage that liberals have enjoyed for decades, but some Democratic operatives are not dismissing that the black vote could have an effect in a presidential election that is expected to be another nail-biter.

Rodell Mollineau, a Democratic strategist, said that, “overall,” Democrats would win the vast majority of black votes in November.

But Mollineau cautioned his party not to ignore Trump’s play: “It’s a reminder that Democrats shouldn’t take the African American vote for granted. Our formula for winning includes driving up African American turnout in Michigan, Wisconsin, Pennsylvania. These are going to be close races, and every vote will count.”

Trump opened a generally soaring and optimistic speech with a checklist of unemployment figures for key 2020 demographics, including blacks and Hispanics, whose votes the president also seemed to be courting.

In a tip of the hat to South Florida, where Republican-leaning Cuban Americans who fled communism are a critical part of Trump’s coalition, he touted his reversal of President Barack Obama’s policy of detente with Havana.

And the president had as his guest at the State of the Union the Venezuelan opposition leader Juan Guaido. It was an extraordinary moment for a president with noninterventionist tendencies but fits with a campaign strategy that, in part, revolves around stoking the support of sympathetic Hispanic blocs and includes as a key message the promise to defeat a Democratic Party that Republicans claim have embraced damaging socialist policies.

“Mr. President,” Trump said, as Guaido nodded from the House gallery, “please take this message back to your homeland. All Americans are united with the Venezuelan people in their righteous struggle for freedom! Socialism destroys nations. But always remember, freedom unifies the soul.”
–Washington Examiner

The post Trump aims to court Black vote with Black State of the Union guests appeared first on DefenderNetwork.com.