Headlines coming out of “The People’s Convention” were all about Tami Sawyer, the activist-turned-county commissioner now seeking to become the next mayor of Memphis. Sawyer and seven other candidates in multiple races won the title of “The People’s Candidate” in the grassroots nonpartisan political event held June 8 at Paradise Entertainment Complex.

But Rev. Dr. Earle Fisher thinks that focusing so much attention on the endorsements misses the bigger news story — that for all the criticism of its turnout, process and alleged favoritism, The People’s Convention brought hundreds of everyday Memphians together to organize and mobilize for political action. 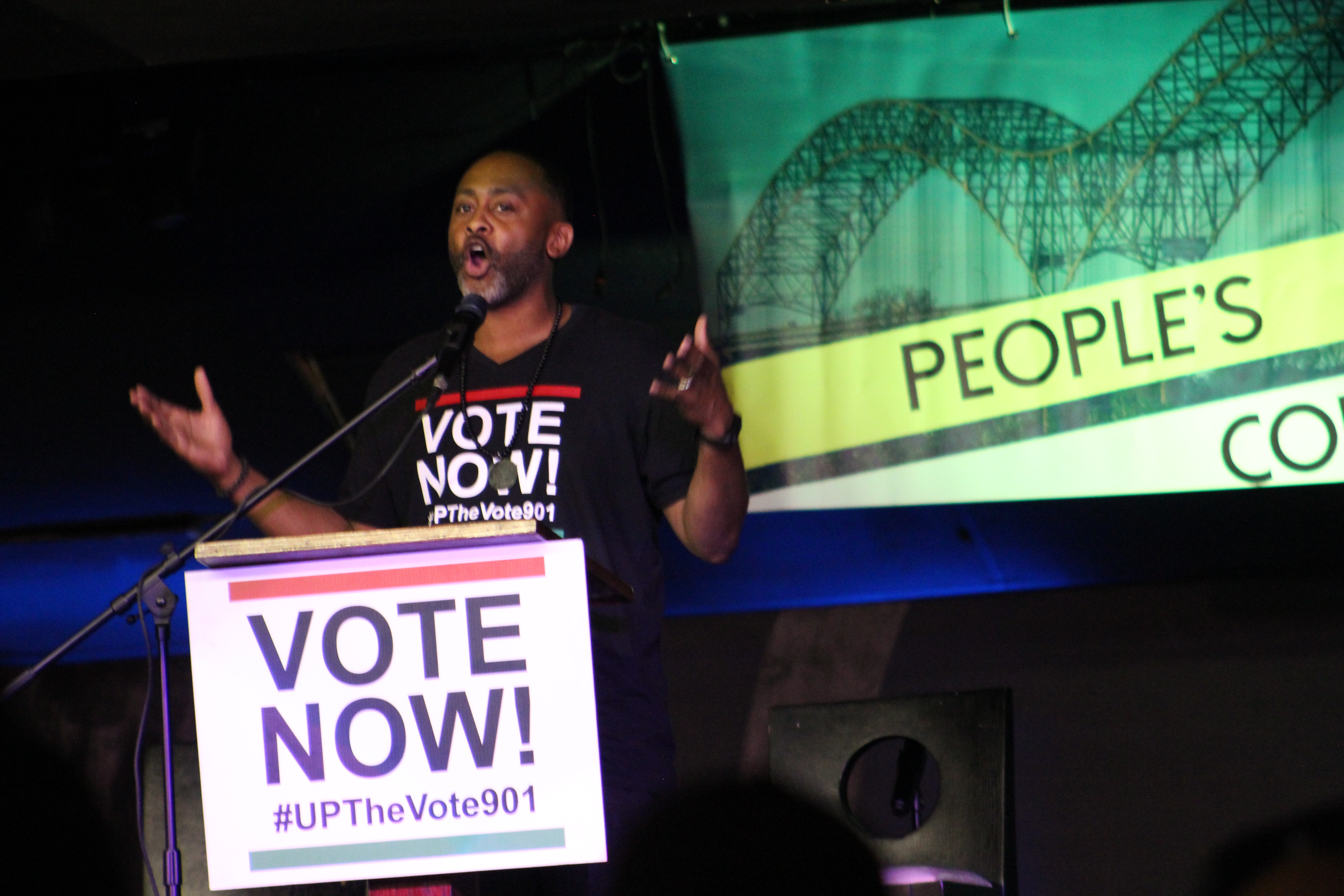 “People are centering on the slate of the candidates more than we would recommend if they want to appreciate the totality of the effort,” said Fisher, whose #UPTheVote901 movement spearheaded the convention. “Our central point is the agenda and the mobilization of people in the political process.”

In the run-up to The People’s Convention, there were rumblings that the event would be a glorified pep rally for a predetermined slate of candidates in Memphis’ upcoming municipal elections. Specifically, given that Fisher and Sawyer aligned to get Confederate statues removed from city parks, some assumed that the event was a rally-in-disguise for Sawyer’s campaign. 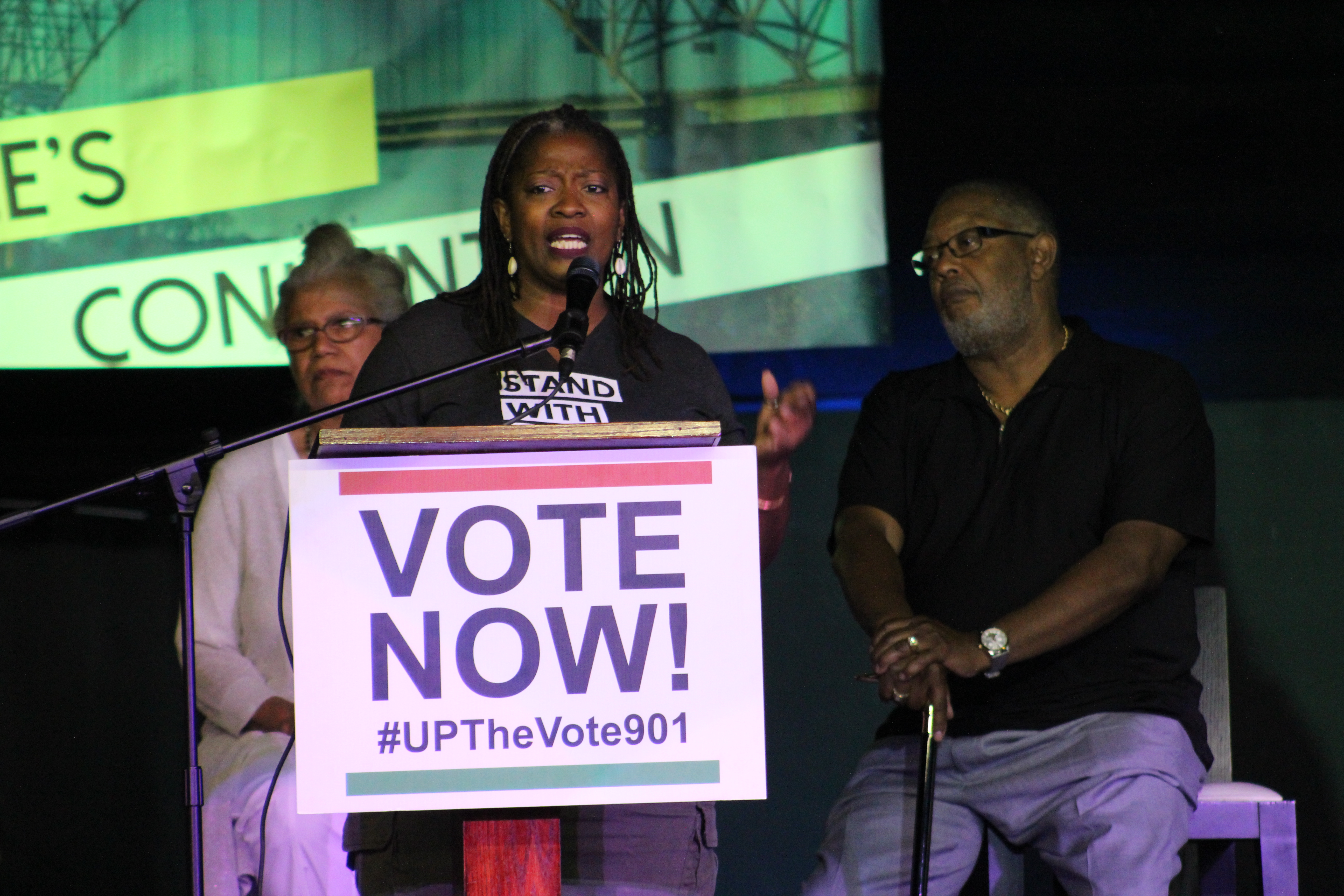 But even as a diverse collection of 500-plus Memphians steadily streamed into the Paradise Entertainment Complex on Georgia Avenue for the convention, Fisher was on stage declaring that the convention wasn’t just about endorsements – it was about an agenda focused on city finances, education, crime, employment and housing.

After registering, attendees received a handout titled “Memphis People’s Convention Agenda.” The document said that more than 2,200 Memphians were surveyed to identify the most important issues ahead of city elections in October. “Anybody who cannot support and endorse this (agenda) is not capable of providing the political service that we need,” Fisher said in his opening remarks.

Co-organizer Sijuwola Crawford said that legalese and legislative lingo was deliberately left out of “The People’s Agenda” to keep it easily digestible for citizens.

“It’s an aspirational document,” Crawford said Wednesday. “From the inception of the document, it was bigger than this election and what can be accomplished in this general election. This is what we want out of politics moving forward at every level.”

Organizers say that more than 900 people registered online for the Convention, though only about 500 of those attended. However, another 150 people registered onsite to push the attendance above 650. Those numbers, combined with the more than 2,200 online surveys, made organizers feel they’d achieved an accurate sampling of the city.

“In national polls, people use a sample size of 1,000 to talk about 260 million voters,” Crawford said. “So, we certainly believe (our sample size of) 2,000 people can be representative of Memphis.

“The truth is, this is probably as diverse an event as we’ve seen in Memphis but still representative of the demographic,” Crawford said in earlier remarks. “There were people who are black or African American, white or Caucasian, people of Hispanic or Latinx descent. There were people we know who identify as gay and trans(gender). Christians. Nation of Islam. People who identify as not religious. Business owners and the working poor and unemployed.

“We saw a great representation of what Memphis looks like – and what it can look like in the future,” he added. “This was a great step in that direction.”

The agenda, which was officially unveiled at the convention, was broken into five major categories, with multiple policy points under each. Among the key policies on the agenda:

And that was just the “official” people’s agenda. Partner organizations to #UpTheVote901 were given time to advocate for a variety of other issues, including reproductive rights, a new green deal and the restoration of voting rights for the formerly incarcerated.

At stake, said Crawford, is more than just an endorsement, or even votes. The idea is to mobilize money, resources and volunteers around “The People’s Candidates,” as convention organizers called endorsed candidates. 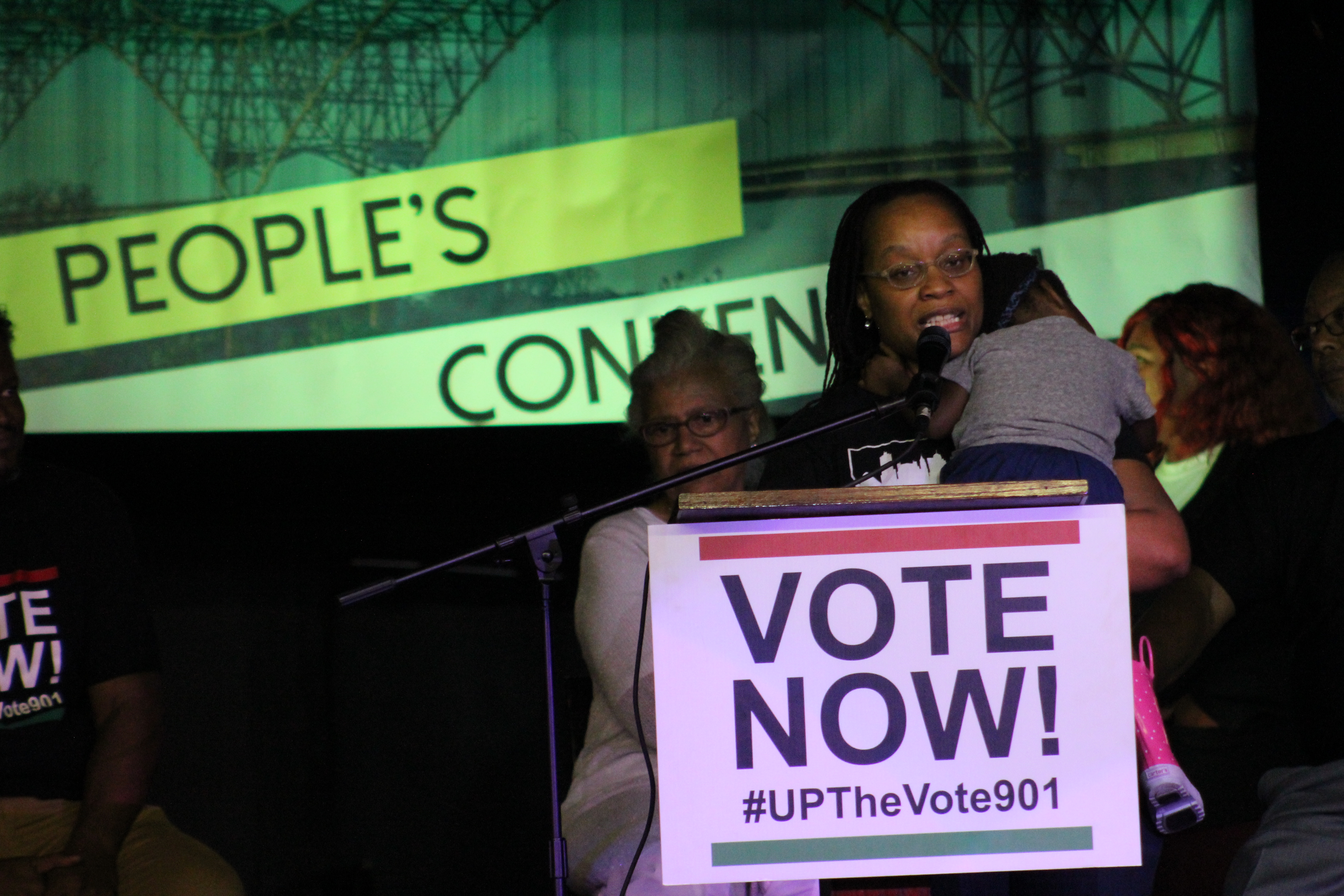 Ayanna Watkins, the lead organizer for MICAH, speaks as her two-year-old daughter sleeps on her shoulder at the People’s Convention. (Photo: Lee Eric Smith)

“Our work is going to be (about) how do we build this base for the agenda first, and then for candidates who align with that agenda,” Crawford said. “That’ s just the hard work of getting out and having difficult conversations with people.

“People are disengaged and disenchanted because they don’t feel a part of this political process,” he continued. “But what we want to show people is that there is power in our numbers. And we want to link candidates with these issues and from there, with a wider base, we want to move these people to the polls . . . and beyond.”

The convention applied a version of “ranked choice voting” – a method of voting where voters rank multiple candidates on a ballot. For the People’s Convention, participants voted using Menti.com, an online app that collects and presents audience feedback in real time.

Even that method of voting was its own political statement. On multiple occasions, Memphis voters have already approved a form of ranked voting for municipal elections, but implementation has stalled. The convention’s election process provided a learn-by-doing example of how such a ballot would work.

It’s been said that the democratic process is neither quick nor neat, and the Memphis People’s Convention was no different. Even as the event started nearly an hour after its listed time, people were still filing in. And as a political event, there were impassioned political speeches that stretched the convention into late Saturday afternoon.

Among those giving brief remarks was Shep Wilbun, one of the organizers of the 1991 Peoples Convention. That year, Dr. Willie W. Herenton defeated Wilbun to win the People’s Convention – and eventually the mayor’s office itself.

“The times are different. The process is different. The needs are different in some degrees, but your People’s Agenda today is the same as ours,” said Wilbun, a former city councilman. “That’s damning in one sense, and inspiring in another. I told them then that 25 years from now, we would need to have another People’s Convention, because what was done then will have been forgotten.”

Incumbent Mayor Jim Strickland declined to attend, as did Herenton, who served as mayor for 17 years and is seeking another term. In remarks after the convention, Fisher said that Strickland, Herenton and other candidates had not seen The People’s Agenda, as it hadn’t been released early.

The New Tri-State Defender reached out to both the Strickland and Herenton campaigns for responses to the “People’s Agenda.” At press time, only the Strickland campaign had responded.

“As we have said before, we are focused on the October 3rd election,” said Steven Reid, a consultant on the Strickland campaign. “Mayor Strickland is running a grassroots campaign and is taking his record of accomplishments and plans for the future to every neighborhood in the city.”

Crawford said there will be additional events before the election, including meet-and-greet type events that will give voters another chance to question candidates. But the focus remains squarely on the Agenda itself.

“It’s a living document. We can add to it and subtract from it as needed,” Crawford said. “But for the candidates, we’re going to fight like hell. We’re going to knock on doors, make phone calls and pull people together around this agenda – and get people to the polls to support this agenda.”