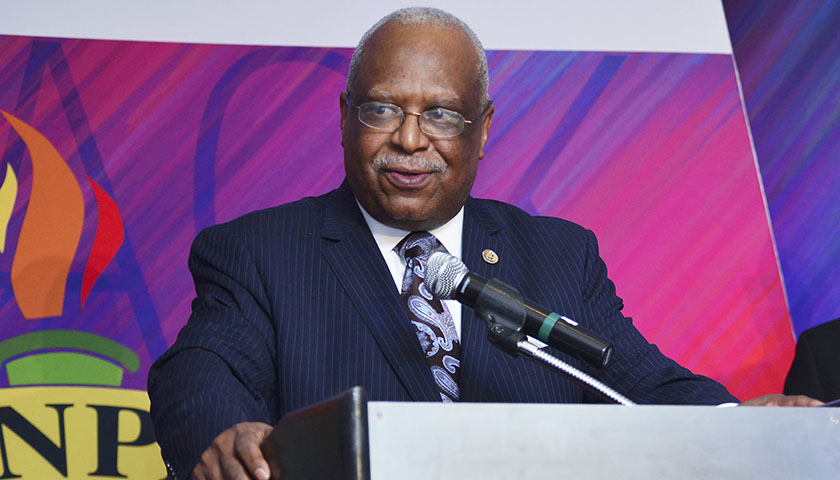 After a half-century in the automobile industry, James Farmer has certainly seen it all.

And, after receiving a lifetime achievement award from the National Association of Minority Automobile Dealers (NAMAD) earlier this month, Farmer took time to reflect.

“I can remember at a NAMAD banquet there were two tables, maybe three at a conference of minority dealers,” he said. “But I watched it grow to the level that it is today with many [tables] and, to be in a position within General Motors and to assist the industry and see it grow, has been gratifying,” he said.

Farmer has set the example for many inside and outside of the automobile industry.

He earned a Bachelor’s of Science degree in marketing from Central State University, Wilberforce, Ohio in 1967 and, after nearly 10 years in advertising, sales and marketing at the Airtemp division of the Chrysler Corporation, he began his career with General Motors at the former Delco Products Division in Dayton, Ohio, in 1976.

Even though Farmer retired as a vice president of GMAC in 2004, he remained committed to fostering positive business relationships between the Black Press and the auto industry.

“Jim Farmer has done so many great things, solved so many problems, and he’s bridged so many gaps for our industry,” said Damon Lester, the president and CEO of NAMAD, a Washington, D.C.-based nonprofit that’s dedicated to developing strategic relationships and advocating for the advancement of business policies and practices that ensure diversity and economic parity remain a priority in all aspects of the American automotive industry.

“His value goes well beyond his tenure at General Motors,” Lester said.

“His character and integrity are legendary and no matter what the issue was, no matter how dire the situation, he could pick up that phone and call a Rev. Jesse Jackson or a Rev. Al Sharpton or someone and have a dialogue with them and get their perspective and come back to everyone else with some sort of middle ground that was fair for all parties,” Lester said.

Farmer, who also has been honored by the National Newspaper Publishers Association (NNPA, The Black Press of America) with the organization’s prestigious Torch Award, Legacy of Excellence Award and Lifetime Achievement Award, recalled his youth when he sold EBONY and Jet magazines and the Cleveland Call and Post newspapers.

He said that’s where his connection to the Black Press began.

“I grew up with it,” said Farmer, who remains an advocate of the Black Press.

“James Ellis Farmer is the epitome of more than a half century of career excellence in the automotive industry,” NNPA President and CEO Dr. Benjamin F. Chavis, Jr., said.

“The Black Press of America via the NNPA salutes Jim Farmer for his outstanding global leadership,” Chavis said.

Farmer was appointed to the President’s Committee on the Arts and the Humanities under President George W. Bush where he traveled the world as a cultural ambassador.

A member of the Board of Advisors at the Harvard School of Divinity Summer Leadership Institute, Cambridge, Massachusetts and the Thelonious Monk Institute of Jazz in Washington, DC, Farmer also served on the National Board of Advisors Development Team, planning the commemoration of the 40th Anniversary of the John H. Johnson School of Communications at Howard University, Washington, DC.

Farmer also has presented the President’s Committee on the Arts and the Humanities in France, Vietnam and India, and most recently in China, as part of a Global Cultural exchange program with the U. S. Department of State and the Theolonious Monk Institute of Jazz.

However, Farmer’s passion has always been in the auto industry.

“My career has been gratifying,” he said.

“I do remember the unfortunate economic conditions that befell the country and the automobile industry, and we saw a drop off in automobile dealers – a dropping of Pontiac, Oldsmobile, Saturn,” Farmer said.

“That meant that it affected a number of dealers of color who had franchises,” he said.

Now that the economy is steady, or some would say robust, Farmer said he’s hoping that more young people of color will look to own dealerships.

“There are opportunities at GM and other places and the time is right,” he said.

“Today, it’s so diverse. I remember when GM, Ford and Chrysler had more than 90 percent of the market. Today, they collectively might have 40 percent.”

“So, in the auto industry these days, people have to have diversity. Not just in color, but in thought because we have cars today that we didn’t have 50 years ago, and I also remember when there were only about six black dealers [nationwide] and now GM has 50,” Farmer said.

With that, it’s important to capitalize on the opportunities available, which was a lesson Farmer said he learned when he was a child.

“I am one of 14 kids and my mother and father were married for 61 years and they raised us with the idea that, when much is given, much is expected,” Farmer said.

“So, when you’re blessed, you have to share those blessings and that is just basic philosophy and it’s kind of a religious belief that I have always had during my years at Chrysler and GM,” he said.