Lori Black is looking for work. She also knows you have to dress for the part, which is why the slim 52-year-old Memphis native made sure she was sharp in her dark pinstripe pants suit – nails done, shoulder length hair flowing.

In a capacity crowd at the University Center Ballroom at The University of Memphis, Black blended right in with the business owners, the city officials and corporate execs who gathered there on Tuesday. Memphis Mayor Jim Strickland was there, as was Shelby County Mayor Lee Harris. Even Gov. Bill Lee made remarks. And there Black was, rubbing shoulders with all of them, trying to network to find work.

“I look like I belong here, don’t I?” she said, with a wild gleam in her eyes.

Of course, she was in the right place to find work. The event was “How to Help Your Business and Community: A Forum Connecting Memphis Area Businesses with Sources of Skilled, Qualified Employees Who Are Ex-Offenders,” which was held Tuesday morning at The University of Memphis.

“Part of criminal justice reform, being tough on crime and smart on crime is finding ways for those who will be coming back to find meaningful employment,” Lee told media after addressing the group. “When we make reentry more successful through employment, then we save taxpayer money, because we lower the recidivism rate. And ultimately, we lower the crime (rate), right?” 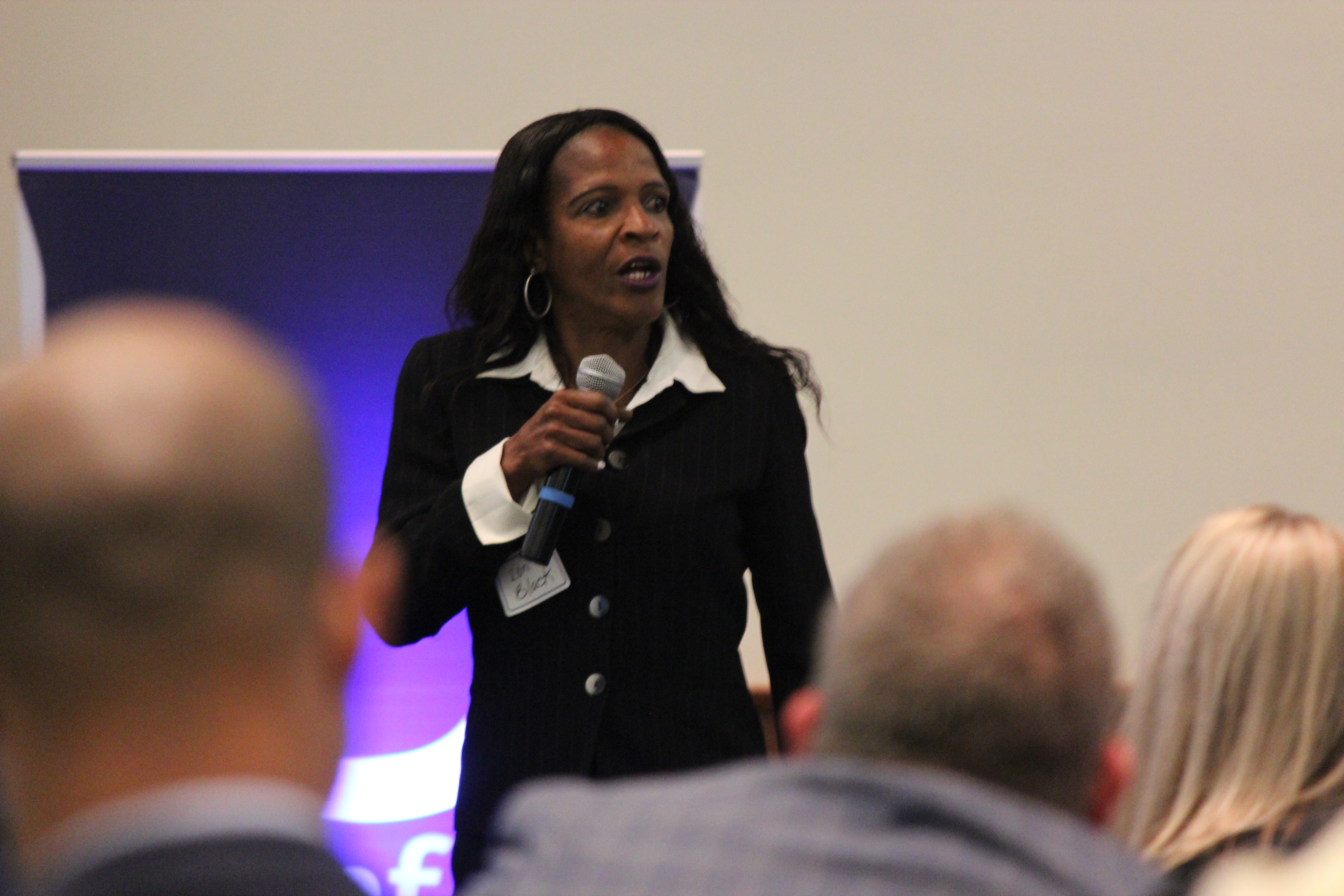 Lori Black, an ex-offender determined to get a job, pleaded with employers and elected officials to help people like her become productive citizens again. “I’ve got something to contribute,” she said. (Photo: Lee Eric Smith)

“When an offender is released, they’re already battling someone who doesn’t have a crime for $7 and $8.15 an hour,” said Stacey Books, an ex-offender who’s now a program director with Persevere, an agency that helps ex-offenders find jobs.

And ex-offenders made the case for themselves.

“Taking up the trades I did on the inside helped me build my skill set for where I am now,” said Robert Woods, who is now thriving in what he calls “probably the best job I’ve had in my life.”

But for many prospective employers, a nice suit and friendly personality won’t overcome the fact that ex-offenders are legally required to “check the box” when filling out job applications.

Despite the fact that Black said she’s 10 years sober and has left a troubled past behind her, she’s still an ex-offender. And the stigmas that go with that label has been just too much to overcome.

“My background don’t determine me,” a defiant but determined Black said. “Not today, it don’t.”

Getting employers to see past the offense to the opportunity is paramount, Lee said.

“The key is connecting employers with those that are coming out and breaking down the stigmas and making them understand that there’s a real opportunity for them,” Lee said. “It’s actually a win-win.”

Harold Collins, who heads the Shelby County Office of Re-Entry, echoed that sentiment.

“We tell our prospective employers, we will not send you anybody that we wouldn’t support as being ready to work for you,” Collins said. “That means they have gotten trained, they’ve done the job readiness program. They’ve done the mental health part of the trauma that they’ve experienced while they were incarcerated. They’ve done some mental work about reconnecting with their families. And then they’ve also been drug screened randomly.

“So, we’re not sending you anybody that’s not ready for work. We will put our stamp on that individual let you know that this person is ready,” he continued. “And on top of that, we will bond them. So, there’s really no financial loss to you, should that employee do something wrong.”

Meanwhile, Black just wants another shot. She admits she was out in the streets in her younger years, stealing things to support her addiction to crack.

“I got to running the streets,” Black said. “Got turned out by boys and men. That’s what it was then. But I was chasing that high. I was getting it too.”

Black said she spent a year in a women’s prison but was in and out of jail repeatedly. But she says she never committed a violent crime, and she accepts responsibility for her actions. “I wasn’t doing nothing to nobody but myself,” she said. “If I hurt anybody, I hurt myself.”

So, what does she want to do now? What’s her dream job? “Own my own restaurant,” she said. “I know how to cook, clean up. Hotel work. I can do it all. I got all kinds of experience. I just ain’t been able to use it.”

She may get her chance. While being interviewed for this story, Black was approached by Phunda Sanders, an offender workforce development specialist at the Mark Luttrell Transition Center. “We have clients that we work with, and she had a need. So we had to help her with her need,” Sanders said.

“Somebody is expecting her call,” Sanders said. “It will work out for her.”

When the TSD caught up with Black later in the event, she was chatting up another contact who had asked for her information. Networking had put some pep in her step.