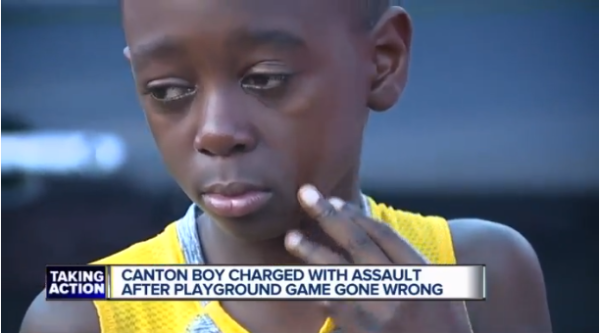 A 10-year-old Michigan boy is facing criminal charges after what his mother describes as a schoolyard game of dodgeball gone terribly wrong.

Cameishi Lindley said she was shocked when she got a call from Wayne County Juvenile Court last Wednesday about her son Bryce, a rising fifth-grader who is now charged with aggravated assault after injuring one of his classmates during the schoolyard game.

“These kids are basically playing a game we all have played,” Lindley told WXYZ Detroit, likening the contest to dodgeball, except the students throw balls into the air rather than at one another. Lindsey did not explain how not throwing balls at one another is like dodgeball.

The incident unfolded in April at Ruth Erikkson Elementary in Canton,  city about 8 miles west of Detroit. According to a police report, a student was injured after Lindley intentionally struck him in the face with a ball. The boy suffered a concussion as a result of the blow, among other injuries.

“He sustained facial issue damage to his face,” said the child’s mother, who asked that she and her son remain unnamed. “He had a black eye, [and] a bruised nose.”

Cameishi Lindley said her son was given a one-day suspension from school after the incident and believes that should’ve been the end of it.

“I couldn’t believe it,” she said of the charges brought against her son, which carry possible punishment of time in a juvenile detention facility, probation and/or community service. “This is a kid that was playing on the playground with his friends.”

The mother of the injured student believes otherwise, and suggested the incident was a case of bullying. She told WXYZ this is the second time her son, who has a medical condition that makes head/face injuries especially dangerous, has been targeted.

The frustrated mother complained to school officials in mid-April, one week before her son was struck again on April 29.

“My son was hit twice in the face with a ball previously due to this,” she said. “The child apologized to my son and my son said ‘Mom, it’s OK, we’re still going to be friends.’ “

The woman said the incident involving Bryce was the final straw, as she became increasingly concerned for her child’s safety.

Lindley’s mother said she was unaware of any of the previous incidents before now, and it’s unclear whether the fifth-grader was involved in the first schoolyard incident as well.

“I’m sorry that her child got hurt,” said Cameishi Lindley, adding she she nor her son were aware of the other student’s medical condition. “I’d be sorry for any child that got hurt.”

Lindley told WXYZ she only wishes the matter could’ve been resolved in a classroom — not a courtroom.

Bryce, 10, is scheduled to appear in juvenile court Aug. 1 for a pre-trial hearing. A fundraiser to help cover his attorney’s fees has since raised over $4,200.