Kaepernick, others call out Jay-Z, Beyoncé for sitting during SB anthem

Beyoncé and JAY-Z chose not to stand during the National Anthem at this year’s Super Bowl and Twitter has many thoughts.

The couple, along with their daughter, Blue Ivy, were photographed sitting during Demi Lovato’s performance of “The Star-Spangled Banner” ahead of Sunday’s big game at the Hard Rock Stadium in Miami Gardens, Florida.

While they were far from the only ones who chose not to stand during the performance, many outspoken Twitter users felt they were trying to make a statement, possibly echoing protests by athletes like Colin Kaepernick and others who famously took a knee during the anthem as a peaceful protest against police brutality.

Others pointed out that, if it were a political statement on the family’s behalf, it comes at an unexpected time considering the fact that JAY-Z recently partnered with the NFL to collaborate on entertainment events — including the star-studded halftime show.

Whether they meant anything by their choice to remain seated during the anthem, Twitter still had a lot of feelings about it.

Beyonce and Jay-Z are a DISGRACE!pic.twitter.com/kLtstX5QVM

Beyonce & Jay-Z remain seated during National Anthem…That disrespect aside – she has sung the national anthem & performed 2 halftime shows, yet she couldn’t find it in her to support Lovato who suffered through many struggles? SMH#SuperBowl2020https://t.co/kGrfeiQVUJ

Kaepernick himself — who has been outspoken in his refusal to watch the Super Bowl or support the NFL — shared a screenshot posted by another user who seemingly implied JAY-Z was being hypocritical for sitting during the anthem after partnering with the NFL despite their handling of National Anthem protests in the league. 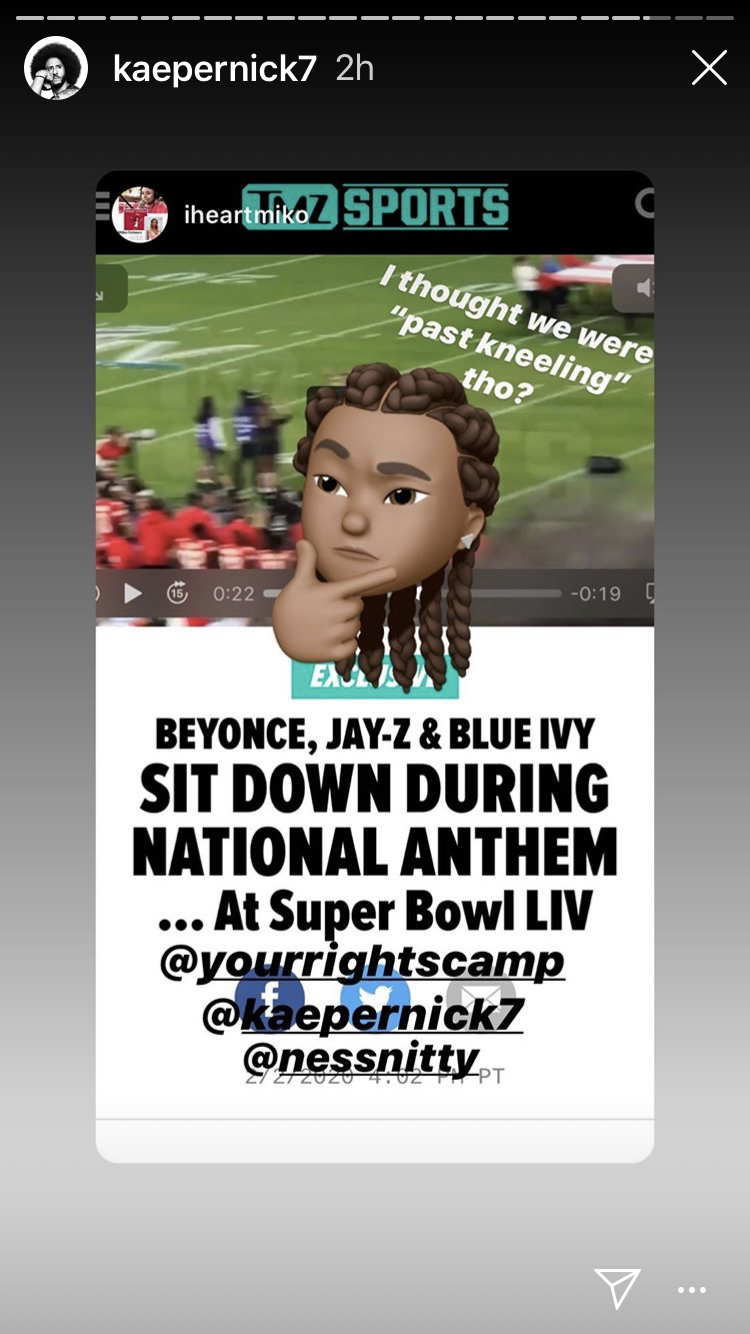 Meanwhile, others defended Beyoncé and JAY-Z, arguing that they were within their rights to choose whether or not to stand during the National Anthem. Many also felt that critics were making a big deal out of nothing in an effort to attack the couple’s reputation.

The post Kaepernick, others call out Jay-Z, Beyoncé for sitting during SB anthem appeared first on DefenderNetwork.com.