How do believers exercise faith amid COVID-19?

A meme suggesting that persons who wear masks during the current pandemic lack faith in God is just one example of a growing debate. 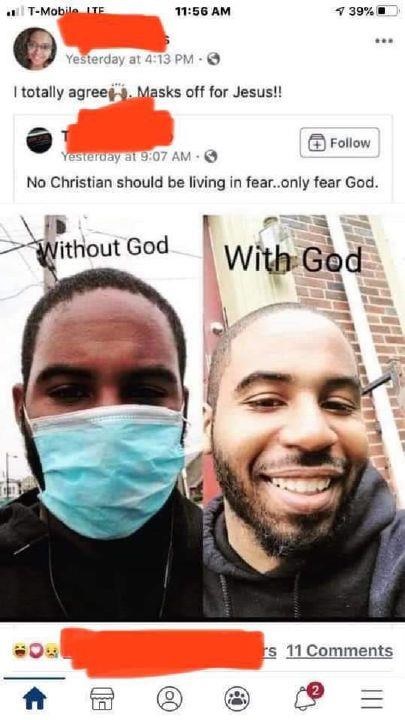 It comes amid President Donald Trump’s recent declaration that places of worship are essential and should re-open immediately, and news that up to 30 Church of God in Christ clergy, members of the largest African American Pentecostal denomination, recently died of COVID-19.

The question for some: how should people of faith conduct themselves socially?

During a recent episode of “Fish, Grits & Politiks,” show creator and host Marcus Davis asked Dr. Anthony Pinn, author and professor of Religious Studies at Rice University, if practicing social distancing was denial of faith and an exercise in fear.

“There’s something about this larger commitment that ought to be to the welfare of folks. And having folks come into a context which they can easily be infected and expose others, I just don’t understand how you make that about faith as opposed to the offering plate.”

Pinn further pushed back against ministers encouraging their members to resume in-person worship, asserting those ministers “are confusing sanctification with stupidity.”

“You can make the Bible say whatever you want… [but] the biblical text shouldn’t rule out common sense. Here is a virus. You cannot detect whether a person has it or not. And it’s deadly. Stay home.”

Pinn asserted that rather than trying to rationalize or “theologize” the virus, we find answers to the question, “How do we behave in the face of something we can’t control?”

Regarding the meme suggesting wearing a mask shows a lack of faith, numerous ministers chimed in, all coming to the same conclusion.

“It reduces the reality of God and God’s protection to our willingness to take health risks while ignoring scientific realities God has revealed,” said Dr. Earle Fisher, pastor, Abyssinian Baptist Church in Memphis.

“God is creative intelligence. So, when we fail to use intelligence and respond in ignorance, we are not demonstrating faith, we are rejecting the power of God,” said Rev. Djenaba Akida, executive pastor, Shrine Houston.

“In the mask-up issue I ask myself, am I doing this for me or in sacrifice and love for others to see Jesus in me,” said church planter Howard Lee Thomas III. “And that’s why personally, I decided to mask up.” Thomas shared Romans 14:13: “So let’s stop condemning each other. Decide instead to live in such a way that you will not cause another believer to stumble and fall.”

Dr. Kwesi Kamau, pastor, Impact Church in Dallas, did not mince words about his feelings on the meme’s assertion.

“This statement is a false expression of power. It is a fairy-tale protest based neither on scripture nor any God-logic. Strangely, this pseudo theology is grounded in a prosperity motif that gives primacy to American exceptionalism and white supremacy.”

The post How do believers exercise faith amid COVID-19? appeared first on DefenderNetwork.com.