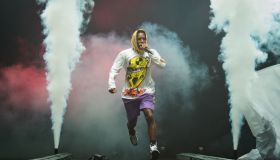 Despite A$AP Rocky saying three years ago, “I don’t wanna talk about no fucking Ferguson,” Black activists and elected officials are fighting for his freedom from a Swedish jail. Members of the Congressional Black Caucus are now speaking out.

According to TMZ, Hakeem Jeffries and Andre Carson, along with Congressman Adriano Espaillat, who is part of the Congressional Hispanic Caucus, will stand on the steps of the U.S. Capitol today and demand A$AP’s release from a Swedish jail.

Jeffries said, “The situation with A$AP Rocky is unfortunate, it’s outrageous, it needs to be addressed. You can expect that members of Congress, particularly those of use who are part of the Congressional Black Caucus, are going to continue to weigh in forcefully until A$AP Rocky is free.”

Earlier in the week, a State Department spokesperson exclusively told Polticio that Secretary of State Mike Pompeo has been briefed and his office is monitoring the situation, “There are certainly some facts about the arrest and detention that raise concerns. We expect all governments, including Sweden, to treat American citizens fairly and with respect. … We hope to see ASAP Rocky and his colleagues back on tour and reunited with friends and family soon.”

Rev. Al Sharpton released a press release, along with his National Action Network, calling on members of Congress to demand the State Department not only intervene but also allow Sharpton to visit Rocky as a minister. A petition that was previously started said there were deplorable conditions at the Swedish detention center where Rocky was being held.

The press release also noted that Sharpton believed that Rocky was acting in self-defense during the June 30 altercation.  According to a comprehensive timeline provide by Pitchfork, Rocky had been on a European tour when the fight broke out with local media blaming the rapper. The very next day TMZ published the video of the fight, which purportedly showed Rocky and his entourage fighting against one other person. It also showed several men accused of Rocky and his crew of breaking a pair of headphones. The men followed them after making the accusation and a brawl ensued after a woman accused Rocky of sexual harassment.

Another video appeared to show Rocky trying to make peace before the fight started.

Rocky reportedly surrendered to local authorities on July 2. They were ultimately ordered to be kept in detention during a mandatory two-week investigation. As a result, Rocky has missed multiple tour dates. The help of Sharpton  and the CBC is a bit ironic considering during a 2016 interview with “The Breakfast Club” radio show, Rocky appeared to distance himself from social justice issues and the Black Lives Matter movement as a whole.

“So every time something happens because I’m Black I gotta stand up? What the fuck am I, Al Sharpton now? I’m A$AP Rocky. I did not sign up to be no political activist,” Rocky said at the time. “I don’t wanna talk about no fucking Ferguson and shit because I don’t live over there! I live in fucking Soho and Beverly Hills. I can’t relate. I’m in the studio; I’m in these fashion studios; I’m in these bitches’ drawers. I’m not doing anything outside of that. That’s my life.”

Sweden has until Friday to decide if they will prosecute the 30-year-old rapper whose real name is Rakim Mayers.