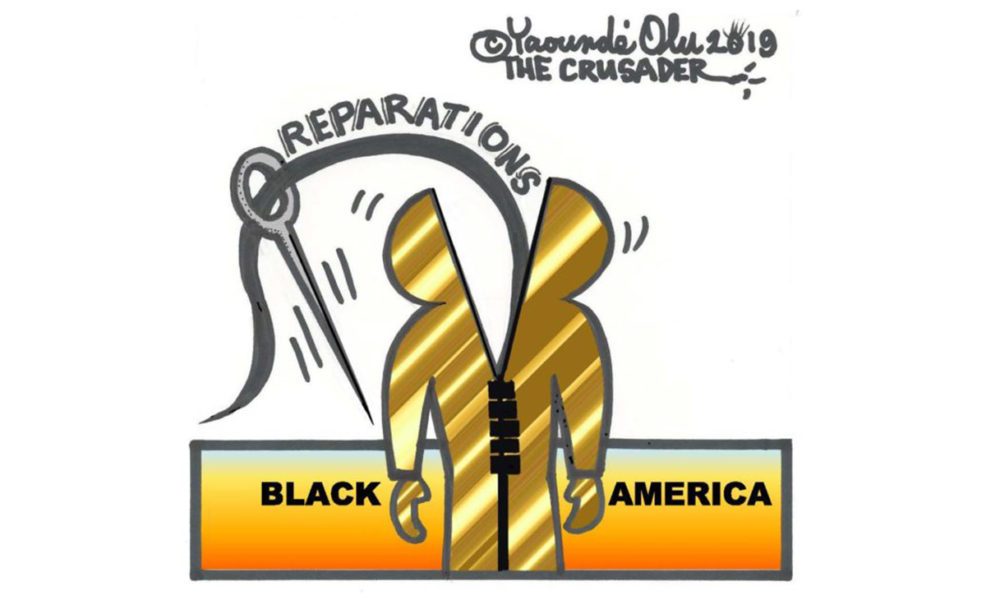 By The Chicago Crusader

The subject of reparations for slavery is high in the public consciousness due to several new developments. For one, the issue was addressed recently by the United States Congress; the U.S. House of Representatives Subcommittee on the Constitution, Civil Rights and Civil Liberties held a hearing on H.R. 40, a bill to establish a commission to study and consider a national apology and proposal for reparations for the institution of slavery. Along with others, Ta-Nehisi Coates and Danny Glover provided testimony. Coates is largely credited with bringing the issue into the mainstream several years ago by penning a well-received, powerfully ingenious article, The Case for Reparations, in the Atlantic.

There is no doubt that the Black community needs REPAIR as a result of 246 years of violent servitude followed by years of Jim Crow. Reparations would help provide some relief from the resultant psycho-social wounds that have afflicted American Blacks. The problem is that the issue of reparations is very complex, with few people coming to a consensus as to how they should look. As is usual with too many issues in the Black community, a deep divide has developed around the subject. There are actually some African Americans who don’t believe that reparations should be given, alleging that they would just make people lazy and take away the incentive to work hard to achieve success. Another concern is connected with the form that reparations should take. Some people assert that cash payouts would be counterproductive and ineffective. They feel that money alone won’t address the many problems that beset the Black community in America. Others are suggesting things like tax relief, free college tuition, free healthcare, and various other help modalities that could enhance the quality of life for American Blacks.

One of the biggest challenges that has surfaced, however, is a schism between various groups around who should receive repair. One newer group, the #ADOS (American Descendants of Slavery), tends to want a streamlined approach guaranteeing that only those people who can prove slavery in America as part of their family lineage should receive reparations. #ADOS has been accused of fomenting division among Blacks. Another group, N’COBRA (National Coalition of Blacks for Reparations in America), on the other hand, has been in the trenches for many years and has an arguably broader Pan African approach. And finally, there are even people who feel that the African nations that participated in selling people into slavery should be asked to pay reparations.

What is certain is that the Black community in America needs and deserves repair. This nation became one of the richest on the planet due to 400 years of free labor. Along with that has come the atrocious treatment of Blacks in this country at the inception of slavery and up to the present day. Institutional racism and its attendant maltreatment has impacted every aspect of Black society. Kentucky Senator Mitch McConnell (R) made a ridiculous statement regarding reparations; basically, he said they weren’t necessary because we have had a Black president! This type of one-dimensional thinking demands that further education about the matter be made available to more Americans. For instance, it has been revealed that white slave owners received reparations for the loss of their human property when the slaves were freed! People need to know this!

It’s a given that the 40 acres and a mule originally promised to the freed slaves probably would not be appropriate today, especially the mule. What is certain is that Black people in America are going to have to come to some kind of consensus regarding the form that reparations should take, who should receive them, and then follow-through with a demand for implementation. The internecine squabbling has got to stop! The most prudent approach would be to give ALL Black people in America some kind of time-dependent reparations based on the fact that ALL Black people have been and are subjected to previous and current adverse whims of institutional racism, white supremacy, socio-economic violence and other systemic barriers that are contributing to a lower quality of life for all of America’s darker citizens. Reparations should include all of them. Now! A Luta Continua.