In late January — while the world focused on the coronavirus in China — Cedrick Smith was in Houston issuing a warning to his Facebook friends.

“WE GOT SOME BAD STUFF OUT HERE!” he wrote.

Smith, a medical director at an urgent care facility, then ticked off a series of tips: Don’t eat unattended free samples at grocery stores (“YUCK!”), cough into the corner of your elbow and wash your hands vigilantly (“wash under your nails!!”).

The messages were mostly meant for his black followers. As a black man himself on the front lines, Smith knew his community could very well take a shellacking: He’s seen firsthand how systemic racism and oppression play out in the health care system. “I knew that the virus, no doubt, would disproportionately harm African Americans,” Smith said.

“Even as privileged as I am as a physician, not a day goes by that I don’t think about my blackness and how it is perceived,” he said.

As the new coronavirus spreads throughout the state, black Texans feel as though they’re facing a more pronounced susceptibility: Longstanding inequalities make them less likely to have access to proper health care, and more likely to face racial bias that prevents them from getting proper treatment. They also suffer disproportionately from certain maladies — like high blood pressure or heart disease — that make the virus more deadly.

“I could go on and on and on. But you have all these things happening and then carriers of the virus not knowing how viciously it attacks organs, especially weakened ones,” he said.

While racial data in the state paints an incomplete picture of the coronavirus’ impact on black Texans, early national data shows black people dying at higher rates from the coronavirus.

It’s not that the coronavirus is only targeting black people — thousands of Americans of all races have also died from COVID-19 — but the alarming rate at which black people are dying exposes the class and racial inequality that makes people of color more vulnerable to the contagion’s deadly effects.

For many medical experts, the racial disparities are easy to explain. One analysis showed that some doctors were less likely to refer black people who show symptoms of COVID-19, the disease caused by the coronavirus, for testing. And at a time when elected officials advocate for staying home, black Americans disproportionately belong to the part of the workforce that does not have that luxury. This fear has become even more pronounced as the Texas governor looks to reopen the parts of the economy as early as Friday.

“Deaths by race are a proxy for socioeconomic status,” said Summer Johnson McGee, the dean of the School of Health Sciences at the University of New Haven. “Stay at home orders are luxuries for white collar workers that essential workers do not have.” 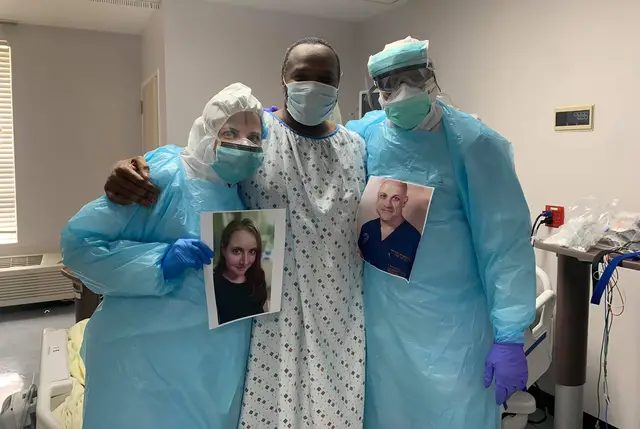 In Boney’s case, he may have never known he had the coronavirus had he not been tested. Instead of a dry cough and difficulty breathing, all of his issues were digestive in nature. Through a telehealth call, his primary care physician said it sounded as though he had a stomach bug. But, Boney said, “my body kept telling me something is seriously wrong. I listened to my body, and I kept saying to myself that I need to get tested.”

By the time he did on March 25, and was admitted to an emergency room, doctors discovered that both of his lungs were completely filled with pneumonia. Soon after, they found all of his vital organs were compromised, his heart working overtime to compensate.

He spent more than a week in the hospital.

“A lot of [black people] have told me they didn’t have the symptoms or that they were turned away because they had to meet certain criteria,” Boney said. “Some people told me they were being charged $165 to actually get the test or that insurance was required to get the test.”

So far, COVID-19 is killing black Americans at a devastating rate. Black people account for roughly a third of positive tests in Michigan and represent nearly 40% of deaths in that state, even though they make up 14% of the population. In Louisiana, about 58% of the people who have died are black, though only a third of the state’s population is.

President Donald Trump has acknowledged the growing signs of disparity, and said that federal authorities were working to provide statistics that might help examine the issue. “We’re seeing tremendous evidence that African Americans are affected at a far greater percentage number than other citizens of our country,” Trump said at a recent press conference.

BREAKING! Uber proud of my boss @RepThierry146 for garnering bipartisan support from 49 @TexasHouse Members in a letter to @GovAbbott for an Emergency Task Force to tackle COVID-19 mortality rates of African Americans in TX! #txlege pic.twitter.com/Zxo8JtDgfX

A spokesman for Abbott did not respond to a request for comment about whether the governor would take such action, though Abbott said at a recent press conference that he’s “concerned about a disproportionate impact of those who contract or suffer severe consequences from COVID-19 who are representatives of minority communities.”

Texas isn’t the only state that’s been slow to collect and publish racial data. The Centers for Disease Control and Prevention only recently began publishing some detailed data on the racial breakdown of COVID-19 cases.

This has prompted a sober reflection in some corners.

“I’m not sure that anyone is surprised that we are in this statistic at this time,” U.S. Rep. Eddie Bernice Johnson, D-Dallas, said during a Texas Democratic Party press call. “All of the things that lead to our vulnerability have existed for some time.

“We’re the vulnerable, so it’s not a surprise that we’re here suffering the most casualties in this new pandemic,” she said.

Kandice Webber, a black critical care nurse in Houston, said it’s not uncommon for her to see black and white patients — similar in age and symptoms — receive varying levels of care.

Still, some have inaccurately tied these disparities to individual behaviors. When asked by a reporter about the disparity between the rate at which black Americans are contracting COVID-19 as opposed to other racial groups, Surgeon General Jerome Adams said, “African Americans and Latinos should avoid alcohol, drugs and tobacco.”

His statements are at odds with health and race experts, who note that the rapid spread of the disease, a lack of testing, and a lack of early communication about its threat, combined with confusing — and false — rumors that black people were immune, left an information vacuum in some communities.

Minkah Makalani, an associate professor of African and African Diaspora Studies at the University of Texas at Austin, said the history of redlining and segregating black people in Texas and elsewhere to underserved urban areas also plays a part in the disparate outcomes.

“The problem with segregation, redlining and Jim Crow is not simply that it confined people to particular areas, but that those areas were then underserved by the state and local governments,” he said.

After returning from a vacation in Thailand in mid-March, Tarah Taylor, 33, thought she should get tested for the coronavirus. Not only did Thailand’s number of cases peak right after she left, she had flight layovers in Tokyo and Los Angeles — both hotbeds for the coronavirus.

But she returned to her hometown before Houston opened mass testing to people without symptoms. And after showing up at a testing site at 4 a.m. and waiting for hours, a doctor delivered the news: She wasn’t eligible to receive one.

Taylor hasn’t had any common symptoms associated with the virus since returning from her trip, but was anxious to get tested. She has a roommate with asthma and a young daughter who she now has to tend to with schools closed. While Taylor doesn’t think her race played a part in her inability to get a test in March — she got one in April after Houston expanded testing and found out last week she tested negative — she worries other black people might be seen as low-risk targets simply because of their race.

“There’s a myth that black people can endure more pain than other types of people and usually when we do complain about issues, they’re not taken seriously,” she said. “I was not a person who seemed to be high-risk, even though I had travelled through high-risk areas.”

A similar fate played out for UT-Austin history professor Leonard Moore who was in contact with outgoing university President Gregory Fenves several days before his wife was diagnosed with COVID-19. Moore said he was notified about the situation and his proximity to Fenves, but was still told he couldn’t get a test “because I wasn’t showing any symptoms,” Moore said.

Research has also shown that stress brought on by racism, discrimination and subtle microaggressions can lead to bad health outcomes like heart disease, which can in turn make people more susceptible to the virus. The word that Smith used to describe this — “weathering,” a term coined by public health researcher Arline Geronimus, details the long-term negative toll that things like fear of interactions with law enforcement, unfair interactions at work or outright racism can cause on the immune system.

And no black person is immune to those effects, Smith, the Houston-area medical director, said.

“The disparities that exist and those types of pressures and stresses on the body are going to play a factor,” he said.

“That’s part of why I sent out that warning in January,” he added. “Because I know these disparities exist and that the risk for us is higher.”