At-Large Candidates Get Questioned on Topics 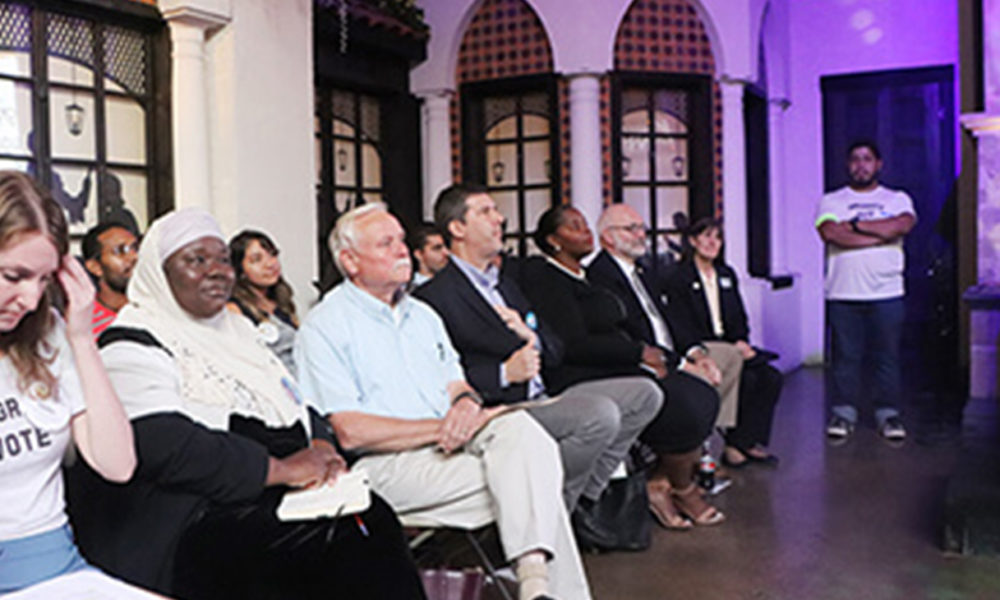 NASHVILLE, TN — Six candidates for at large council answered questions Monday night before a crowd of at least 1,000 at Plaza Mariachi on Nolensville Rd. A coalition of 21 pro-immigrant organizations hosted the forum to hear the candidates answer questions about immigration enforcement, criminal justice, small business and the economy, affordable housing, education, and workers’ rights.

District 18 Councilperson Burkley Allen got a question about Affordable Housing. In 2014, Allen managed to get a small source of recurring funding dedicated to low income housing.

“What would you do to address the affordable housing crisis?” asked Katherine Ledezma, a board member of Tennessee Immigrant and Refugee Rights Coalition (TIRRC).  Allen, who helped create the Barnes Fund, said Nashville’s attempt to establish inclusionary zoning for working families was preempted by the state legislature.

“I’m working on providing funding that would be geared toward lower-cost housing without requiring such a high return on the investment,” she said. “There are more tools and we’ve got to bring those to Nashville and I will continue to work to make those happen,” said Allen.

One by one, the at large candidates fielded questions asked by a member of one of Metro’s immigrant communities, most of whom now live in South Nashville and Antioch but who speak at least two languages and whose families came from all over the globe.

District 31 Councilman Fabian Bedne got a question about access to services for immigrant and refugee families, a subject close to his heart. Bedne told the crowd he was the first immigrant ever elected to the City Council.

“Usually an immigrant is not interested in services. They just want to be left alone. They come to know about problems with the city when the city comes to them and tells them to mow their grass or you gotta take care of the dog,” he said. Bedne said immigrants make up 20% of the city population and they deserve to be treated equally.

“I’m frustrated when people get a notice from Codes and it’s in English. Even if you’re an Anglo

you cannot understand those code notices,” he said. “Imagine if English is your second language and you’re trying to figure out what you did to get this scary notice from the city telling you that you’re going to have to go to a judge,” he said. His remarks drew laughter as well as applause.

Gicola Lane is a community activist who helped create the Community Oversight Board.

“For many immigrants even minor encounters with law enforcement can result in their detention or deportation. If you were elected what would you do to address inequality in our justice system,” asked Evelin Salgado, a teacher at Cane Ridge High School.

“I’ve bailed out immigrants,” said Lane. “It’s a rush against the clock before we’re seeing a hold placed on someone. So I think one thing we can do immediately is to stop working with ICE,” she said. Lane was roundly applauded.

Incumbent Bob Mendes was asked about cooperation between local police and federal immigration officers. He’s against it.

“Local government doesn’t work if people are afraid to interact with it,” Mendez said.

He said nothing works right if people are worried that the first thing that comes up is their citizenship status.

“During this last term we did file a couple of pieces of legislation to try to keep our jails from being used by ICE and to keep city government from paying for federal immigration enforcement,” Mendez said. He wrote those bills but the TN state legislature overruled them.

“I’m still interested in that legislation and hope we get a chance to pursue it again in the next term,” Mendez said. He said it would take 21 members of the city council to challenge the state law in court.

Gary Moore was asked about wage theft and job safety: immigrant workers get plenty of the first and not enough of the second. Moore comes from the ranks of organized labor. He is a former firefighter and served in the Tennessee House of Representatives for seven years.

“What will you do to address the experiences and conditions of immigrant workers in Nashville?” asked Abey Lissane, member of the Nashville Ethiopian Community Association.

“This is something I have fought for my whole career,” said Moore. “I have fought to protect the rights of immigrants and all working men and women…. I will continue to do that,” he said.

Workers’ safety is supposed to be enforced by the Tennessee Occupational Safety and Health Administration, a state agency, but Moore said issues like wage theft can be addressed at the local level.

“In the procurement process we can make sure there is language in there that protects the rights of the workers… to make sure we have no more wage theft,” Moore said.

He said on big jobs general contractors tend to “push things down to the subcontractors.”

Moore said tougher language in city contracts would make general contractors police subcontractors better so they don’t steal from workers. “We can do that in the procurement process. I would fight to make sure that happens,” Moore said.

Moderator Judith Clerjeune, asked all the candidates what they would do to represent the experiences and perspectives of immigrant and refugee communities on the council. Zulfat Suara would be the first Muslim on the city council.

She is a longtime advocate for refugee and immigrant families and a Certified Public Accountant (CPA). She was Assistant Comptroller at Meharry Medical School and in her CPA practice, she had four counties and two city governments as clients. Suara wants to make sure Metro budgets reflect the issues important to her community.

“We talk about Nashville being welcoming…it’s about time our government actually reflects the population that it serves. I think we need to have more voices on the council and as a Muslim woman, immigrant, African American, I bring all those diverse voices to the table. But I want people to also remember that I am that Muslim women who is also a CPA ..and I’m an immigrant who is an MNPS parent and a woman that has actually worked with Tennessee women and children,” she said.

This article originally appeared in The Tennessee Tribune.

Cecilia Rouse Will Be The...