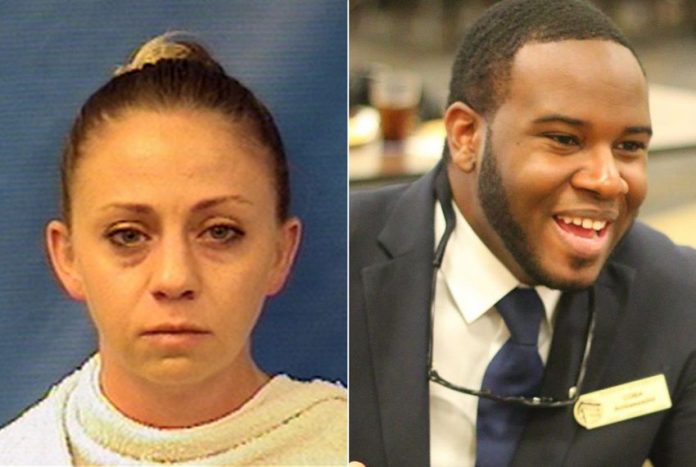 The aunt of a Dallas cop Amber Guyger who walked into a Black man’s apartment and shot and killed him defends her niece when the director of a storytelling initiative calls the shooting a “form of lynching.”

“This inflammatory comparison makes me shudder,” Nancy Bishop said in an op-ed published online Monday in The Dallas Morning News.

The post ran months after the shooting death of Botham Jean on Sept. 24, 2018, and an investigation into now-fired Officer Guyger’s actions.

Guyger has said she thought she was walking into her own apartment when she saw someone she thought was an intruder and fired.

According to The Dallas Morning News, McElroy said during a racial healing event that Jean’s death “was a form of lynching … which was overt in the ’20s and ’30s. And we have never had reconciliation on a sustained basis.”

Bishop, a former reporter at The Dallas Morning News, said in the newspaper op-ed that she wonders “how McElroy can be so certain that the tragic death of Jean was racially motivated.”

“What happened the night of Sept. 6, 2018, was different from other incidents that drew national attention when white police officers killed Michael Brown, Walter Lamar Scott, Stephon Clark and other black men,” Bishop said.

She mentioned transcripts from a 911 dispatcher call.

“Would a racist police officer have this type of initial reaction, or was this response from someone who realized this was a horrific accident,” Bishop asked.

She later added, “The only thing this incident has in common with the heinous act of lynching is that a black man died.”

Jury selection in Guyger’s trial is scheduled to begin Sept. 6, exactly one year after Jean’s death.

Guyger’s trial date is set for Sept. 23, according to the district clerk’s office.