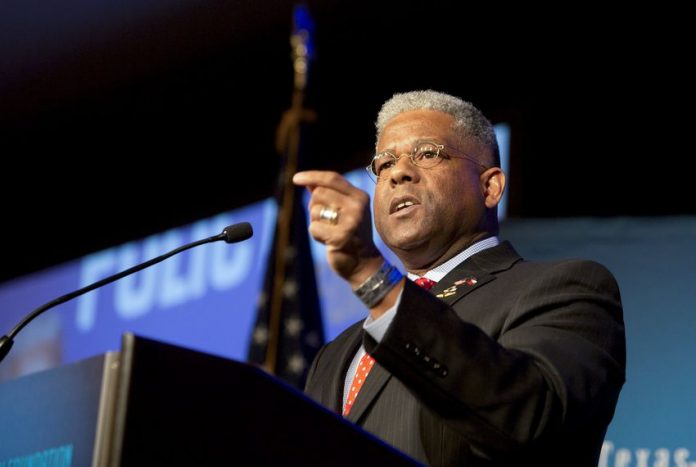 Allen West, the former Florida congressman who now lives in Texas, announced Wednesday evening that he is exploring a run for Texas GOP chair, setting up a potential challenge to the party’s current leader, James Dickey.

“As I look ahead as to how I can continue my service to this constitutional republic and the great state of Texas, my family and I … have decided to explore the opportunity to be the next chairman of the Republican Party of Texas,” West said in a live YouTube broadcast.

Delegates will elect the next chair of the Republican Party of Texas at its 2020 convention, which is scheduled for May 14-16 in Houston. Dickey first won the job in 2017 after the previous chair resigned, and he was reelected a year later — both were contentious races.

After West’s announcement, Dickey issued a statement making clear he is running for re-election next year — and warning against intra-party conflict during a critical cycle for Texas Republicans.

“We are on an incredible path and we must not waver,” Dickey said. “Division in Texas amongst our base is not what we need to defeat what will be next year the greatest Democrat onslaught that we have seen in decades.”

West’s announcement was closely watched in the Texas political world. He had said in advance that he would announce whether he was running for one of three offices: the 32nd Congressional District, U.S. Senate or state party chair.

He acknowledged that he may be letting down some supporters by not seeking a return to Capitol Hill. “But if the soul of Texas is lost, then what gain do I have in that personal accomplishment or achievement?” West asked.

His potential candidacy for the 32nd District drew particular attention. The incumbent — freshman U.S. Rep. Colin Allred, D-Dallas — flipped the seat last year, and Democrats were salivating at the prospect of facing a conservative firebrand like West in a battleground district.

West’s re-emergence on the political stage still gives fodder to Texas Democrats, and the state party reacted to his potential chairmanship bid by highlighting the GOP’s array of down-ballot losses last year.

“With that record of mounting failure, it’s no surprise that right-wing conspiracy theorist and ousted Florida Congressman Allen West would see these results and decide to run for Texas’ Trump Republican Party Chair,” the Texas Democratic Party’s executive director, Manny Garcia, said in a statement.

West represented Florida’s 22nd District from 2011-13. After redistricting, West chose to run in a different district in 2012 and lost to Democrat Patrick Murphy in a pricy, high-profile battle.

West moved to North Texas in 2014 after being named CEO of the Dallas-based National Center for Policy Analysis. The next year, Lt. Gov. Dan Patrick appointed West to a spot on the state’s Sunset Commission, which periodically reviews the operation and efficiency of state agencies.

West has remained active in conservative circles, regularly appearing as a pundit on Fox News and joining the Texas Public Policy Foundation last year to lead a new initiative there. TPPF announced Monday that West had left the job.