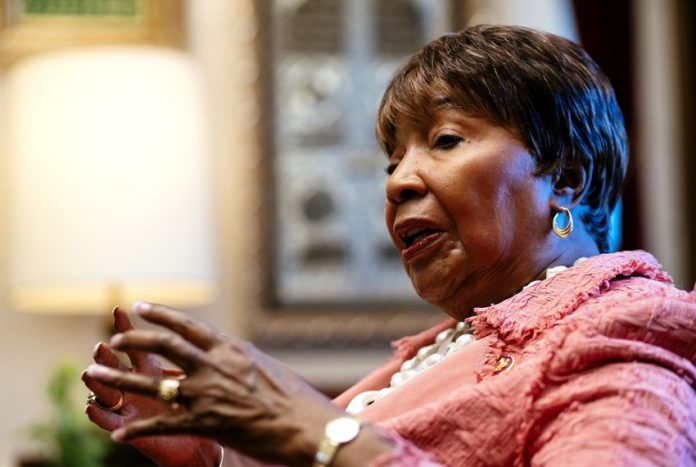 On the afternoon of August 18, 1994, Eddie Bernice Johnson, a barrier-breaking freshman congresswoman from Dallas, stood on the floor of the U.S. House of Representatives and stumped for the most infamous legislation of that decade.

“Every day, most of the headlines have to do with crime,” she said, describing a desperate state of affairs in her home district. “School has been open less than two weeks now, and already teachers have had guns in their faces. They found a gun arsenal underside of the building. It is overwhelming, but we must do something about it.”

Johnson was slated to speak that morning about health care, but she held off for 10minutes to weigh in on President Bill Clinton’s crime bill, which looked to be in jeopardy despite Democratic control of both chambers of Congress.

“I cannot understand why there is so much opposition and so much rhetoric and so much demagoguery surrounding the bill that will address these issues,” she said.

Three days after Johnson’s speech, the Violent Crime and Law Enforcement Act — better known today as the 1994 crime bill — passed the House. The next month, Clinton signed it into law.

Two and a half decades later, Clinton’s $30 billion tough-on-crime bill has become a flashpoint in heated debates about criminal and racial justice. A sweeping package, the bill included several measures that Democrats still broadly support. It included more than $1 billion to fight violence against women and remains the last time Congress passed significant gun control legislation. But the bill also expanded the death penalty, introduced controversial three-strikes and “truth-in-sentencing” laws, and poured billions in funding toward the construction of federal prisons.

Today, the legacy of the bill haunts many of its original champions. For a new generation of liberal voters, complicity with the crime bill’s passage is a sort of political mortal sin. Many Democratic voters remember the bill as an engine of mass incarceration fueled by cruel and racist policing laws. Most notably, Joe Biden, one of its lead authors, has faced a constant barrage of attacks on his racial justice record as he tries to maintain his lead in the 2020 Democratic presidential primary.

Johnson, the first black representative elected from Dallas, is the only current Texas representative who was in office to vote on the crime bill in 1994. She campaigned for it at the time and voted for it when it finally passed the House that August.

In an interview this month in her Washington office, Johnson was unbending in her defense of her record, waving off the criticisms that have assailed Biden and other backers of the crime bill. A quarter-century later, she expressed no regrets.

“I’m not sorry,” Johnson told The Texas Tribune, recalling her feeling of urgency at the time to eradicate the violence and drug trafficking that plagued her district. “If the circumstances were the same today as they were back then, I would do the same thing.”

In the decade leading up to Clinton’s inauguration, many American cities were reeling from crime. Year after year, cities across the country broke their own murder records. For black males between 14 and 18 years old in the 1980s, the leading cause of death was homicide. On TV, crime was inescapable. It even invaded children’s programing, where figures as unlikely as Pee-wee Herman fronted alarmist public service announcements about the lethal dangers of crack cocaine.

Dallas was no exception. A 1989 PBS “Frontline” investigation into the city’s drug trade opened with a jarring declaration: “Behind the gleaming face of Dallas lies a war zone.” In 1991, local homicides surpassed 500, giving Dallas one of the highest murder rates of any city in the country.

“The thing that stood out nationally was the murder rate,” said former Dallas police Chief Ben Click, who took over the city’s police department not long after homicides peaked. “For a city that size to have 500 murders was amazing. … And those were just the murders. How many people were shot and all but didn’t die?”

By the early 1990s, there was general consensus that something needed to be done about crime, but chasmic disagreement over how to address it. Democrats — under the leadership of familiar names like Clinton and Biden — championed sprawling prison expansion, harsher sentencing and reloaded police forces. Republicans pushed back, wary of the unbridled federal spending needed for crime control.

But among liberals, one faction was deeply ambivalent about Clinton’s tough-on-crime platform: black Democrats.

“Crime bills are tough votes for black lawmakers,” The New York Times observed days before the crime bill’s passage. “Blacks are far more likely than whites to be victims of violent crime, and some polls have found that they are more afraid than whites of being murdered or mugged.”

The NAACP campaigned hard against the bill, denouncing it as “draconian” and “a crime against the American people,” and members of the Congressional Black Caucus, fearful of how Clinton’s legislation could harm black communities, introduced a competing bill with a heavier emphasis on alternatives to incarceration and billions of dollars towards drug rehabilitation and early intervention programs.

This uneasiness extended to Dallas’ black community leaders. Diane Ragsdale, an activist who served as a City Council member in Dallas during the 1980s and 1990s, said she distrusted the bill’s focus on police enforcement and drastic sentencing laws.

“Even with the crack epidemic, many of us as activists, we didn’t support that at all,” she said.

Johnson recalled that her choice to support the bill was not easy. She was an old friend of Clinton’s, dating to the 1970s. Years later, he wrote in his memoir that Johnson was “one of [his] strongest allies in Congress.” (Johnson told the Tribune that she spoke with Clinton often during his presidency but said she could not recall any specific conversations about the crime bill.) But at the time, Johnson cited grievances with the bill’s expansion of the death penalty, as well as the omission of a racial justice component written by the Congressional Black Caucus.

She said she made her decision after being moved to action by people in her district.

“I had just decided that I was going to take the safe way and vote against it,” she told the Tribune. “But when I got home and talked with constituents and looked at the situation being described to me in that community, I came back and said to the caucus members that my vote [was] going to be for the bill.”

The crime bill eventually passed with the votes of 26 of 38 Congressional Black Caucus members.

For two decades after the crime bill’s passage, debates over its legacy were mostly dormant. But as the bill’s architects attempt to woo a new generation of voters who have rigid —sometimes uncompromising — political standards, power brokers like Clinton and Biden have had to reckon with the consequences of decades-old decisions. Clinton apologized in 2016 for his bill’s contribution to incarceration levels. Biden, however, has been less repentant.

Johnson, too, pushed back on claims that the bill had damaging effects on black Americans. She noted that she has received “not a single complaint” about her vote in the decades since the bill passed and added that she sees little value in the tendency of younger liberal voters to resurrect bygone decisions in attacks on Biden and other Democrats of their generation.

“I don’t know that you can go back and change history,” Johnson said. “No matter how much noise you keep up, it’s not going to change.”

And while Johnson conceded that the bill may have been overly aggressive in its enforcement prescriptions, she maintained that a softer bill would never have passed. “You can always look at something in retrospect and say what you could have done and should have done, but you’ve got to have the votes to get something done,” she said.

Defenders of the crime bill often point to the precipitous decline of crime rates across the board in the 1990s and early 2000s. They argue that the bill was the saving grace of formerly crime-ridden American cities.

But crime rates were already trending down across the country by the time of Clinton’s inauguration.